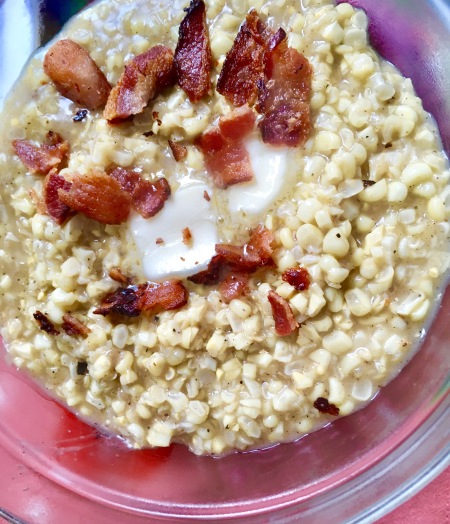 The closer you live to a Corn Field the better your life will be. When corn is ripe, you can literally shuck it in the field and eat the sweet corn kernels right off the cob. Like most Southerners, I prefer White Cornmeal, White Hominy Grits and White Corn for most Casseroles, Soups or Souffle and in Fried Corn . One of the thrills of driving to Gulf Shores, Alabama in the early summer  are the homemade road signs- ‘Silver Queen Corn’… which ripens sooner in South Alabama than just about anywhere. I love to go to Farmers Markets and hear folks asking- ‘Now, when did you say this corn was picked? This morning? It’s probably almost dried out by now…‘ We do love our fresh corn, white or yellow. Hands down, my favorite summer meal is: 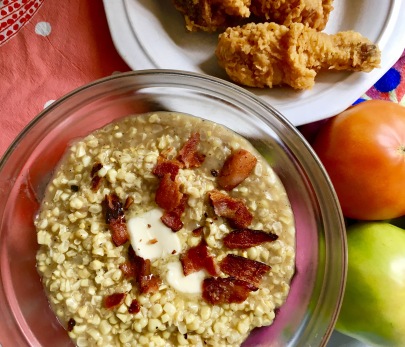 If your mouth is watering, you must have some Southern blood running in your veins somewhere. To my feeble mind and my favorite memories, this meal was top of my list of Southern Comfort Food. I would guess, unless you are at least three generations Southern, you may have never tasted this delicacy called Fried Corn. A famous chef, who returned to his home state of Alabama to open a restaurant planned to serve upscale dining with a down home Southern twist. One thing the chef planned to serve was Fried Corn. He purchased fresh white corn from the Farmers Market only to find that it didn’t taste quite the same as he recalled. As the story unfolded, he discovered that the Fried Corn of his youth was made from field corn, now grown almost exclusively for livestock feed, not for human consumption! Well, it’s even rarer to find field corn now that a whole lot of livestock is grass fed. This very accomplished chef now grows his own field corn! White Field Corn might be heirloom by now…I do know that field corn was dried and saved – to use a seed corn the next year. After I read the chef’s account, I asked a farmer’s wife, who happens to put up with my stupid questions because she’s a true friend- ‘Does anyone grow Field Corn any more?’ She could not think of a soul who still grows it to sell at our local Farmers Market! Nowadays we have to satisfy ourselves with hybrids, like Silver Queen, in our favorite white corn recipes and we have to add a slurry of Corn Starch to the skillet of Fried Corn to make it come close to our childhood memories.

Fried Corn is a Southern delicacy. It’s not the same as Creamed Corn, it’s not even close to Corn Casserole much less a Corn Souffle… no, it is made with very finely cut corn, the scraped juices from the cob and pan drippings- from panfried chicken or smoky bacon, then finished with a generous amount of butter. That’s right, no milk or cream in Fried Corn. Blessed is the cook who knows the old family recipe or owns an old Southern Cookbook with the heavenly recipe for Fried Corn! If you have a well seasoned Iron Skillet even better!

Shuck the corn, cleaning off the silks. *Fried Corn depends on double cutting the corn kernels off the cob. In a large bowl, with a sharp knife, with the stem end standing in a bowl, with a downward motion, slice the tips of the corn kernels off the cob- it will resemble a square cob- cut the ‘corners’ off, then cut the remaining kernels off the cob, scraping the natural juices from the corn (this is the corn’s natural corn starch. Cutting the corn in this manner is critical to Fried Corn. Add Corn Starch Slurry to the finely sliced corn. Place bowl of corn, a large spoon and a potato masher, directly by the stove, to be ready to fry the corn. 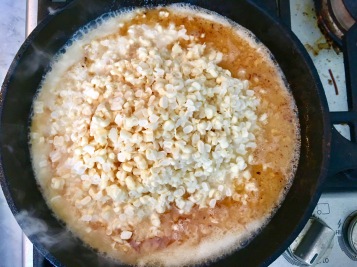 Heat the Iron Skillet with reserved Bacon Drippings until the Skillet is as hot as the Black Bells of Hell. Meanwhile, not leaving the stove, quickly pour corn and slurry into the hot skillet and drippings, you should hear a sizzle. Reduce heat to low.  Stir until corn begins to thicken, use a potato masher to press even more juices out of the kernels.  Simmer until the corn is thick and tender.  Usually 10-12 minutes. Add Butter, cover the skillet and turn off heat, until ready to serve. Salt and pepper to taste.

Crumble Reserved Bacon as a garnish if desired. Oh my goodness! If you don’t try another thing this summer, quick! Go buy some fresh plump white corn and make a batch of Fried Corn. I love to ladle some into a bowl and chop a fresh tomato on top. Sweet, salty, smoky, buttery- what more could you ask? Eat it like a warm summer soup, great on a rainy day or any day! And the next time you’re having Fried Chicken…well, enough said…

*photographs are obviously mine…