I was feeling contemplative about the Fourth of July- okay, I was peeling potatoes for the potato salad- a mindless task… that’s when contemplating is easy. We had just gotten back from a last minute trip to Washington D. C., a city that is filled with more  profound history and symbolism than perhaps any other in this nation. It’s a white columned marbled and statuesque city- some of the marble was quarried right here in Alabama! Of course I’ve been to DC several times in my long and storied life- yet I always come away with a sense of awe and wonder; always learning something new…or something I knew seems to come alive in my mind.  For instance, the expanse of the sky overhead is startling for a major city- there are no skyscrapers- by law. Why? 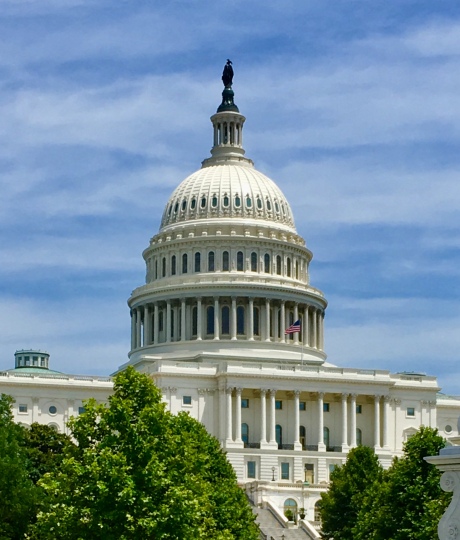 Look at the statue that crowns the dome on top of the US Capitol Building. Her name is Freedom.

Pause and contemplate that! Profound, especially when you consider that Freedom was commissioned in bronze when our nation was divided- literally by civil war and unrest. The pediment that Freedom stands on is embossed with the Latin words E Pluribus Unum, out of many one.  The center part of the capitol building had been destroyed during the War of 1812.. it was being rebuilt; the new plans included the iconic dome…made of cast iron weighing 1000’s of pounds… President Lincoln insisted that work continue on the building despite the war that had torn us apart, so the American people would be encouraged that our nation would once again be united and whole. 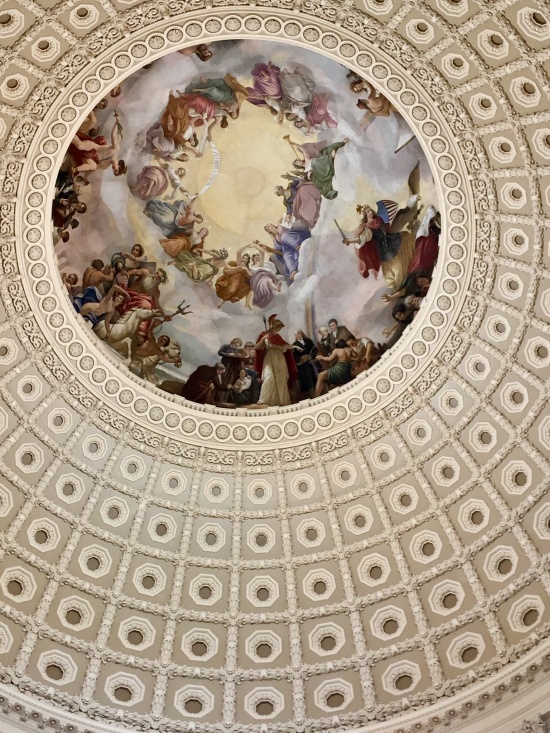 When we last visited Washington D.C. renovations were being made to the interior of the dome, now completed, it is once again a masterpiece.  I couldn’t help being reminded of one of my favorite Scriptures…

‘Since we are surrounded by so great a cloud of witnesses who have  gone before us, let us throw aside every encumbrance and run with patient endurance the portion of the race set before us…’ Hebrews 12:1

George Washington figures strongly in the painting- he is flanked by Liberty and Victory within the dome and each symbolic creature seems to be looking down from the heavens…other figures represent aspects of American life and industry that helped forge our freedom. For instance, Mercury is offering a bag of gold to Robert Morris- the financier of the American Revolution, the war which defeated tyranny and the power of a monarch.  Americans prize freedom; historically, we’ve been willing to fight and struggle to remain free. Now, I know most of you are thinking…

‘Wow, that’s pretty heavy stuff to be thinking when you’re peeling potatoes.’ Well, yes, I guess it is-  however, even Southern girls can contemplate things like this quicker’n whipping up a bowl of potato salad!  After all, it was the Fourth of July- it’s not all about fireworks and barbeque- though I must admit to lovin’ the tastier aspects…. George Washington loved pit barbeque- even gave a few barbeques himself! A tall athletic man, Washington was also endowed with amazing leadership skills, wealth and an impeccable reputation- wouldn’t even lie about cutting down a cherry tree as any school age child is taught. The cherry trees surrounding the Tidal Basin evoke his memory. George Washington was honored as a Revolutionary War General, the First US President and also called The Father of our Country. Washington was named a national icon in the 1800’s when the new capitol dome was being designed. The dome’s design includes a feature that bathes the entire Rotunda in light. Light is symbolic of Truth and Goodness… the two virtues that our government and her people should always strive to attain.

Anytime you’re going on vacation to an historic city- there’s so much to see and do…it’s good to have a few goals. For this trip to Washington DC, the purpose of our trip was to attend an award ceremony at the Pentagon and take the tour, which included the location in the building where an airliner struck the Pentagon on 9/11- the damaged section is now a chapel with  an honor anteroom, including a window looking toward the frightful path of the weaponized plane and overlooking a memorial garden for the 183 lives lost that fateful day. Also we wanted to see the newly renovated dome, eat a lobster roll at Luke’s near the National Portrait Gallery, eat at Bobby Flay’s Burger Palace in Georgetown and we had plans  to watch the somberly beautiful- Changing of the Guard at the Tomb of the Unknown Soldier in Arlington National Cemetery.

The day we were there, four funerals were to be held. As we waited for our tram to take us back- everyone became quiet and with hands over heart- we watched as a caisson slowly passed by- with 6 saddled black horses- the horses on the left had riders…the horses on the right were riderless adding to the  beautiful yet haunting sight. No photographs were taken out of respect for the slain veteran. The architecture in the cemetery is astounding in its masterful detail.

I had finished making our Fourth of July potato salad… A thought had occurred to me- Just how long had it been since I had actually read the Declaration of Independence and why among all of our national holidays had I not made a tradition of reading it? We read the Thanksgiving stories of Pilgrims and Indians, we read the ‘Night before Christmas’ to our bright eyed children…of all the traditions we have in this great nation…why not read the Declaration of Independence on the Fourth of July? Oh, I think we all know some of the beautiful phrases-

Yet somehow the whole declaration and its history isn’t dwelt upon annually. For instance, when you read the whole document- just the reading of the indictments of the monarch, King George III- are extremely informative. The time frame of it’s writing is also interesting… the Revolutionary War was already underway  when the declaration was written and ratified. Even more pressing and dramatic to contemplate- British war ships were bearing down upon New York Harbor!

In June of 1776, the colonies had become increasingly united concerning the need to declare independence from the Crown and Parliament. The delegates appointed a Committee of Five, which included Benjamin Franklin, John Adams and Thomas Jefferson- Time was of the essence…

Jefferson was assigned the task of writing the declaration…he had a little over 2 weeks to write what would become one of the most important documents in human history. After consulting others who edited the document… Jefferson wrote that they ‘mangled it’  even as he exclaimed in his later years that the edits to sentence structure and removal of a full fourth of his original produced ‘the majestic document’ we now know as the Declaration of Independence…it was accepted on July 2, 1776. With that, the colonies had officially severed ties with Great Britain. John Adams believed that eventually Independence Day would become a day of celebration for generations.

Now, this is important! President of the Continental Congress, John Hancock sent a broadside copy of the Declaration to General George Washington, who ordered that the declaration be read in full publically on July 9, 1776 to encourage folks to join the cause and to inspire his troops in New York City…wait for it…

May I be so bold as to suggest that-between July 4 and July 9 of each year… we make an effort to read the Declaration of Independence?After all, it ultimately became the spectacles through which the US Constitution is interpreted.   And in the reading of it, perhaps we will hear the echoes General George Washington’s voice , full of truth and goodness- as he declares Freedom from Tyranny and hear the inspiring words of the majestic document that still inspires generations..

The Declaration of Independence-  ‘…with a firm reliance on the protection of divine Providence, we mutually pledge to each other- our Lives, our Fortunes and our sacred Honor.’

Every thing they had was offered for the cause of Liberty- their lands, possessions and incomes, their very lives and the one thing these brave men valued above all- their honorable reputations.

Independence Day is a wonderful national holiday, full of many reasons to be thankful for the protection of divine Providence – I hope yours was full of good food, fireworks, inspiration and contemplatin’ Freedom.

*Please make note: The purpose of Camellia’s Cottage is not political opinion or commentary. Our purpose is to promote gracious inspiration and genteel conversations.

*All photographs are obviously mine. The photograph of the small American flag was near the Tomb of the Unknown Soldier, I wondered if perhaps a young child had placed it there…

*Forgive me for not crediting sources…many are from tour guides and multiple resources from which notes were taken but no one source to provide a consistent resource.