Scalloped Potatoes are equally at home at Sunday Dinner, a Covered Dish Supper, Bereavement Buffets or a Glamourous Holiday Meal. And let’s not forget- Scalloped Potatoes could play a supporting or starring role on one of our famous Vegetable Plates. Perhaps not a strictly southern dish, scalloped potatoes make a regular appearance as a satisfying side dish any time of the year. Not limited to just potatoes, I honestly believe southerners could scallop almost anything! After a quick glance through some of my reliable cookbooks, in addition to potatoes, I found- Scalloped Shrimp, Scalloped Oysters and even Scalloped Scallops! Scalloped Seafood is almost always combined with a subtly spiced cream sauce topped with bread crumbs then baked in a large flat scallop shells, sold by the stack for just such occasions. Vegetables are a southern favorite to scallop- Tomatoes may be at the top of the list to scallop (after potatoes) yet watch out!  Any vegetable that can be sliced into rounds can find themselves buttered, creamed and baked- Onions, Summer Squash, Eggplant, Zucchini, even Sweet Potatoes are often scalloped.

Okay. What is the difference between a Casserole, Au Gratin or Scalloped Potatoes? It’s the design and the cooking method. Sliced rounds- arranged in an overlapped manner create the scallop design, then the dish is baked using some sort of thickening sauce which doesn’t disguise the scallop design.  Some use the term – Escallop (my grandmother did!) instead of Scallop, yet it still is the same design and cooking method. Still. There’s always an exception to the rule… some experts use the verb – to escallop or to scallop as a cooking method of chopped meat(chicken is good example) or vegetables (corn is too small to create a design)- which is covered with milk or a cream sauce, dotted with butter, seasoned- often topped with cheese or a sprinkling of bread or cracker crumbs. In it’s simplest explanation- scalloped potatoes are a casserole with potatoes layered in a scallop design. Whatever it is- I have to admit, I’ve loved everything I’ve ever tasted which has been scalloped and served- hot!

This week, at the last minute I realized I needed to send a covered dish to a potluck supper- no time to run to the store, I realized I had everything I needed to make Scalloped Potatoes! I added bits of chopped ham to the mixture- *this is often suggested in many southern recipes as a variation. Bacon or even Sausage is also added to many types of escalloped vegetables- just remember you’re not making hash! You’re adding flavor.  I chose to use chopped garlic chives instead of my usual finely sliced green onions.  I also wanted my Scalloped Potatoes to be a rustic version, so the potatoes weren’t peeled and weren’t thinly sliced as I would for a finer presentation! Now, let me stop here and explain- some recipes call for uncooked potatoes to be cooked in a thin cream sauce , however- I needed a quicker more reliable method that only works for Scalloped Potatoes, not other vegetables. My potatoes were cooked in advance; I didn’t make a cream sauce, because as my grandmother so wisely pointed out many years ago- ‘Potatoes have enough starch in them to create their own sauce!’ To her, adding flour created a flavor akin to paste- not good at all.  Oh, how I do run on… just let me tell you how I made: 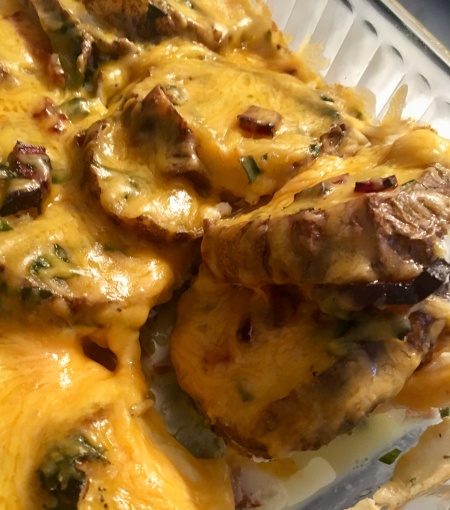 *If sending Rustic Scalloped Potatoes as a covered dish, immediately cover tightly with foil. It’s also a good idea to surround the covered dish with clean dish towels to retain the warmth- though I have to say… even cold- oh my! it’s still good! Now, I don’t want you to think I don’t know how to make prettier designs or a finer, more glamourous dish of Scalloped Potatoes. Thinly sliced, artfully designed it is a beautiful dish. Great for anything other than the finest of food displays- Rustic Scalloped Potatoes are perfect for almost any occasion- offering extra fiber, more color and texture, and best of all- I’ll bet you have everything you need to make them on short notice and with very little effort you get great taste!  By the way- don’t you love reading… ‘ I need to send a covered dish to a potluck supper.’ ? You can hardly get a more southern sentence than that!

*All photographs are obviously mine.