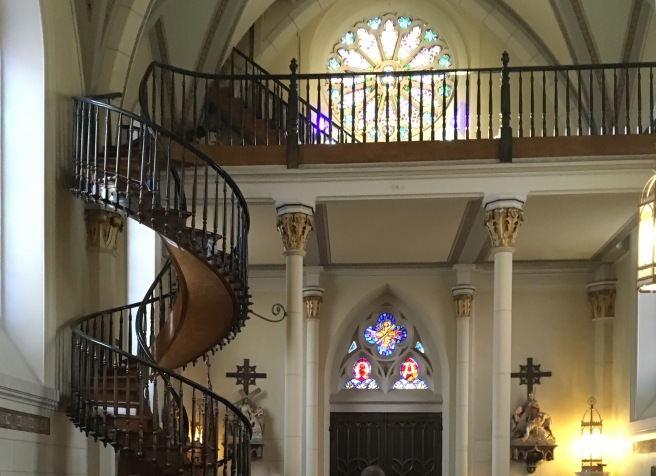 I have been in some of the great cities of this great country and always I go to the great Sanctuaries. Santa Fe is no exception, the St. Francis Basilica is gorgeous and inspiring- however, sitting beside the great cathedral is a small Gothic chapel, thought to be the first of that type architecture west of the Mississippi, the Loretto Chapel. Our Lady of Light Chapel was modelled after Sainte-Chapelle in Paris and was constructed in the 1870’s to serve as a chapel for the Loretto Academy for young women, operated by the Sisters of Loretto. 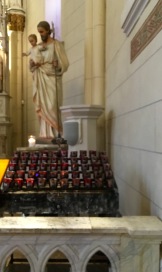 A serious design flaw was discovered after construction- the tiny chapel had not included a staircase to the choir loft. To install one would decrease the seating capacity and seriously affect the beauty of the design. It was suggested that the young women could ascend a ladder to sing, however this would have not been proper or safe.. The Sisters sought Divine Guidance by calling for a Novena to their patron saint, Saint Joseph, the Carpenter. For nine days they prayed. Upon the ninth day, the last of the Novena, a mysterious carpenter appeared, who called himself Jose. He said he had come to design and build a circular staircase to the choir loft. 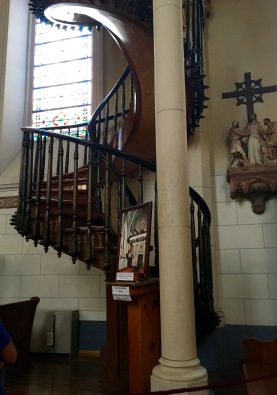 He arrived with a donkey loaded with only three tools- a hammer, a saw and a T square; and tubs in which to soak the wood. The stairway has 33 stair treads in two full 360 degree turns with no center support, nor is it held with any side supports, the full weight rests on the bottom tread. Testing throughout the years has revealed no nails, no pegs and no glue were used in the construction. Further, as science as progressed- the wood has been tested; recent tests revealed- the staircase does not appear to be constructed of any known type of wood found in the entire world.

Upon completion, the mysterious carpenter disappeared, without seeking payment. No records could be found by the Sisters for the purchase of the wood or any building materials. The carpenter was never found. Engineers, architects, scientists and historians marvel at the design, the materials and construction techniques employed; there is no known duplication of the design of the staircase-though extensive research has been done throughout the years. The only modification was to add a handrail ten years after construction. A movie was made of the.Miraculous Staircase and books have been written. Every effort seems to have been made to disprove the miracle. 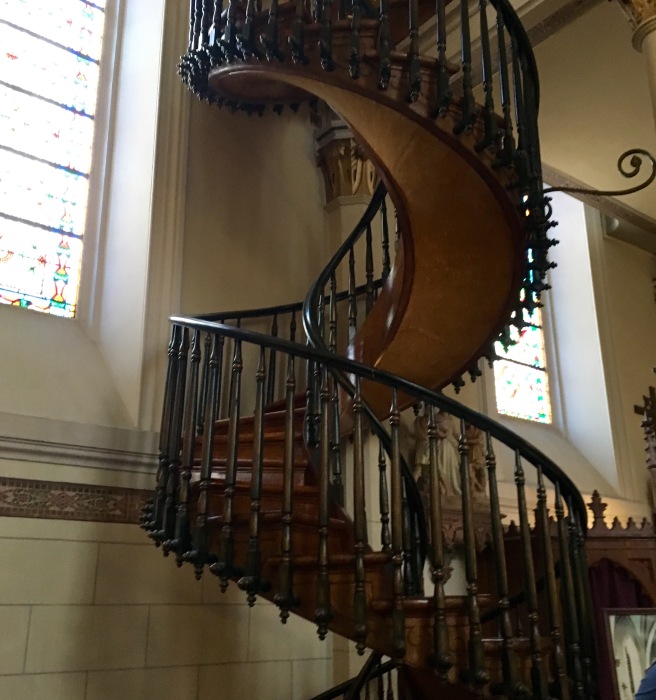 However, I have been there more than 3 times- though I am no scientist or theologian-I can attest to the fact that I have felt something holy, something miraculous, something undetermined by my human mind whenever I have seen it. The Chapel of Loretto is privately owned, it no longer belongs to the Catholic Church. For this staircase to have remained instead of being destroyed when it was sold, for it to have survived for almost 150 years and withstood the scrutiny of those who would wish to dispel it’s origins, is miraculous. To stand in awe of it, is to stand in the presence of what I have come to thoroughly believe is a true miracle, wrought by an Holy God through a mysterious Carpenter Who Heard and Answered the fervent prayers of His Own. I am blessed to have been a witness to the beauty of Loretto Chapel and the Miraculous Staircase. 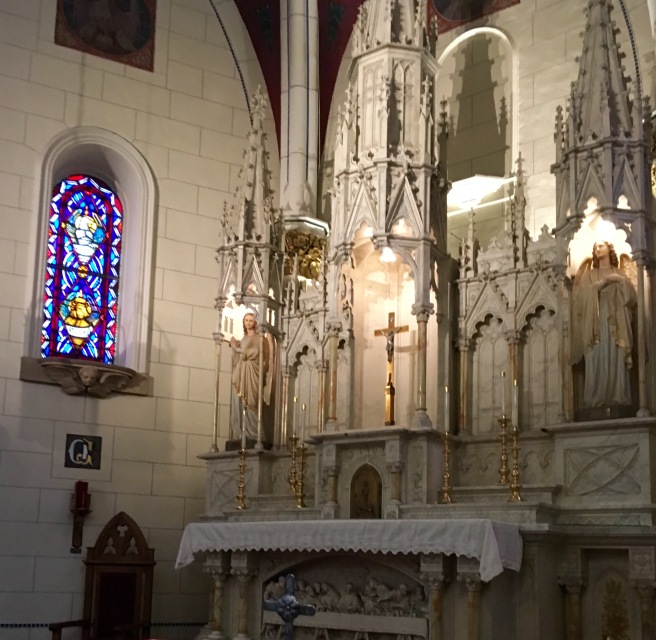 Weddings and Special Services are still held at Loretto Chapel, the staircase is roped off but was used well into the 20th century. All donations to the Loretto Chapel go toward the retirement funds for the Sisters of Loretto, the Chapel of Light. I hope you are inspired by these unretouched photographs of the Miraculous Staircase. Have a Blessed Lord’s Day. It’s a Day to believe in Miracles, I do…I hope you do too.

This photo of the historic Trinity Episcopal Church Burial Ground was taken recently, for several reasons- the large statue of John Watts, Jr., the burial ground of the first U.S. Treasurer, Alexander Hamilton and the pretty subway station reminded me of another trip to New York when ‘Four Days- the Lazarus Principle’ based on John 11- was almost finished. The question: Do You Believe the Subway Exists?’ almost became the title of chapter 38. For your Sunday Inspiration, here is an excerpt:

‘On a recent trip to New York we rode the subway. We had been to New York several times, but had never used this mode of transportation. We knew it was there but had never seen for ourselves how it worked. We believed there was something going on underground, out of sight- that hundreds of people on hundreds of miles of track were moving beneath us – yet above ground we had nothing to prove it. We had the word of others that the subway was real. We saw the entrances to the underground trains; at times we could feel the rumble beneath the grates on the sidewalks. We saw masses entering and coming up from the darkened pathways under this great city. We believed in something that was unseen, unknown, and untraveled in the subway system of New York. We never questioned the existence of the subway or how it worked. We simply believed that it was there with the evidence that existed above ground, the signs- the words of others, even visiting Grand Central Station. We completely believed in the subway system. This trip, we rode the subway, and let me tell you- for someone who has spent most of her life in a small town; it was not easy to navigate! Yet I believed those trains could take us to other parts of the vast city.  When we got on the train – I knew we were moving! When we got off, and came up above ground – we were undeniably in a different part of the city. Throughout the trip to New York, after our subway rides – I was keenly aware that below the surface – out of sight, was a system which moved vast numbers of people from one place to the next. There was a whole world moving beneath my feet.’

You know, it doesn’t take much faith to believe the subway exists. But what of those folks in that burial ground behind this subway station? Do you believe they existed? Do you believe they lived, died and were put down under the ground, and further that they just might be in another place even now? That might take a little more faith. What about this? Do you believe in resurrection? Not just at the ‘last day’- but that life, your life can be changed- resurrected, right here, right now. John Watts, Jr., Alexander Hamilton and even the life of Trinity Church changed numerous times. John Watts, Sr. was considered a traitor for leaving America and returning to his homeland, England- when the Revolutionary War began; he was stripped of his holdings in New York. Left with the shame of what their father had done-John Watts, Jr. and his brother did not leave- they were patriots who stayed; petitioned the new nation’s government and were allowed to buy back their father’s lands. John Watts Jr became a member of the General Assembly of New York State and later became a Judge. Alexander Hamilton came to this country a penniless pauper, became wealthy, a landowner and ultimately the first Secretary of Treasury, designed the country’s financial system and his image is engraved on our ten dollar bills- he was buried in this cemetery after a political foe, Aaron Burr shot him in a duel which was considered shameful, so he was buried in a remote corner of this graveyard-yet, even in death- we Americans came to honor this man- we might say- he was ‘resurrected’ as an historical figure. Trinity Church was first built in the late 1600’s, one of the first churches in America. It later burned to the ground during the Great Fire of New York City. A second Trinity Church was built on this site in the late 1700’s and was severely weakened by heavy snowfall. The current church was built in the late 1800’s as a masterpiece, a beautiful thriving church in the heart of the Financial District, visited by Queen Elizabeth, it ministers to the poor with low income housing, feeding the poor and it’s own- John Watts Jr. heirs established an orphanage and children’s services in his name-Leake and Watts Services,Inc which operates to this day, helping more than 5000 children each year. Their lives and the life of this church are the stories of human history, the rise, fall and resurrection out of shame, hurt-filled events, some not of their own making and of hope and faith.

Jesus said ‘I am the Resurrection and the Life…’ John 11:24 – Jesus said, ‘If you can believe, all things are possible to them that believe…’ Mark 9:23  As we sing…’Our hope is built on nothing less than Jesus’ blood and righteousness…’

Can I get an Amen?